Despite dramatic improvements in technology and software, immersive VR experiences are out of the reach of most consumers, despite the buzz, curiosity and the pent-up demand they create. Entrepreneurs and even some big companies are stepping in and offering VR as ticketed entertainment in public spaces like malls, family entertainment centers, or in stand-alone destinations.

In this mega session, leaders from the world of Out-of-Home, and Location Based Entertainment come together to discuss their successes and failures, manifesting their vision and their outlook on the future of public entertainment in spatialized media. 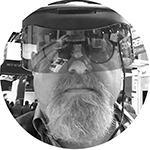 Charlie Fink is a former Disney, AOL and AG Interactive executive who writes about VR, AR and new media for Forbes. In the 90s he was EVP & COO of VR pioneer Virtual World Entertainment.

For more than two decades, James Jensen has worked in illustration, design and interactive media for companies and clients including Sony Entertainment, Dreamworks SKG and his own creative CG animation company, Sandman Studios. Committed to working with leading edge technology, James teamed up with co-founders Curtis Hickman and Ken Bretschneider in 2014 to develop custom software and hardware using real-time gaming engines that THE VOID would later leverage in order to merge the physical and digital worlds.

Today, THE VOID provides mind-blowing experiences that transport people to different worlds and dimensions through the use of location-based entertainment experiences comprised of physical sets and proprietary hardware including a virtual reality headset, accessories, tools and haptic vests. James Jensen is the co-founder and Chief Visionary Officer of THE VOID, the critically acclaimed immersive entertainment company.

Eyal has spent nearly a decade in strategy and corporate development roles in the media & entertainment space. At IMAX he has helped lead the exploration and execution of new business initiatives, including most recently architecting the IMAX VR strategy. He currently is focused on developing and nurturing VR content and technology partnerships to support the growth of the IMAX VR platform

Aaron Pulkka is an interactive entertainment director with many years of development experience, including design, programming, and publishing for Disney, Sony, THQ, Vivendi, and Activision. He started working on VR over 25 years ago, highlighted by his master’s thesis work in the Human Interface Technology Lab at the University of Washington, design and programming in the Walt Disney Imagineering VR Studio, and the Sony Development Entertainment Technology Group. In 2011 he co-founded Rabbx, where he produced and consulted on a myriad of games and VR/AR/MxR experiences for the location-based and home consumer markets. Now at Two Bit Circus he is producing micro-amusement park attractions that blur the line between physical and digital playgrounds!

Joel Zika is a VR artist and Documentarian, and a lecturer in Screen and Design at Deakin University, at Melbourne, Australia.

Trevor is an expert in the out of home Virtual and Augmented Reality sector. He recently completed a Masters of Digital Media degree at Ryerson University focused on Virtual and Augmented Reality and their impact on the Theme Park industry. Through this, he conducted research interviews with many leaders in the global out of home VR/AR industry. The objective of his research project was to discover how to effectively leverage immersive technologies (VR/AR/MR) in commercial out of home settings. Trevor also has past experience as a technology consultant at Deloitte Digital focused on digital strategy and transformation projects. Nelson Advisors targets projects involving digital strategy, business development and project management. Clients include Dynamic Attractions, Secret Location, The App Labb.

Ed Callway has been designing entertainment PC products for nearly 30 years. At ATI/AMD products include sound and graphics cards, the award winning All-in-Wonder graphics + TV tuner series, STB/DTV designs, as well as algorithms for video and display processing. His current work is focused on Virtual Reality in public spaces.