After the Stitch: VFX Techniques for 360 Video with Ross Shain of Mocha VR

Working with 360 in Premiere Pro

No more paint and clone! Academy Award-winning product designer, Ross Shain will show how to finish 360 video with Mocha VR’s powerful planar tracking and masking tools. Removing camera rigs, shadows and unwanted elements are common tasks in 360 post-production. Mocha VR is optimized to automate these tasks as a plug-in inside Adobe, Avid, Fusion, Nuke and more. 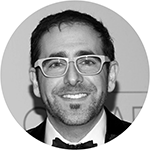 Ross Shain is an accomplished visual effects specialist and the chief product officer of Boris FX and Imagineer Systems. In 2013, Ross was recognized by the Academy of Motion Pictures with a Science and Engineering Academy Award for his work on the development and design of Mocha planar motion tracking software. Most recently, Ross has focused on cinematic VR workflows with the recent launch of Mocha VR, a 360° optimized plug-in for Avid, Adobe and OFX.

After the Stitch: VFX Techniques for 360 Video with Ross Shain of Mocha VR