If you’ve been involved in VR over the past 2 years, you likely already know the name Roy Taylor. Join this leader in the industry as he talks major opportunities, innovations and trends for VR over the next 3 years. 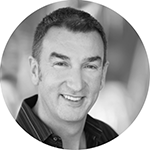 Roy Taylor is Corporate Vice President and Head of Radeon Studios, part of Radeon Technologies Group, AMD. Taylor is responsible for a team promoting all aspects of the AMD ecosystem. In his current role, he manages relations with media and entertainment companies and content creators.

As a speaker, Taylor has delivered keynotes across the globe focusing on AMD’s commitment to developing and advancing Virtual Reality technologies. In VR he heads up partnerships with film, broadcast, gaming, academia and industry.

Taylor joined AMD in 2013. A 25-year industry veteran, he has had a multi-faceted career as a technology evangelist, content strategist and entrepreneur in both start-ups and established companies. He was also the founder of NVidia in Europe.