Horizon: A 360° Journey is a live action 9K dome & VR film celebrating Canada’s 150th anniversary. In this talk Tom C. Hall (REDLAB), the 360 Supervisor, will cover the post-production of making this film a reality: through 9 months of shooting, early experiments, discoveries, trials and tribulations and forging the language of this new format. We will cover lessons learned on keeping a huge pipeline under control, from multi Red Dragon camera arrays, to dome theatre edit suites and compositing a huge format into a seamlessly stitched image that can be enjoyed in every direction. We will also cover the unique differences of being fully enclosed in a real projected image, and as HMDs get wider field of views how it will affect the future of the medium.

This talk is targeted to anyone from post-production professionals to emerging filmmakers who want to learn the lessons and experiences of making a long form immersive project. 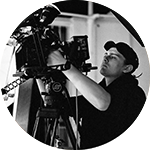 Travelling all around the globe, Tom C. Hall is an award winning Stereographer, Cameraman and Virtual-Reality Filmmaker. Tom is constantly exploring how emerging technology can enable storytellers to better connect with their audiences and drive the art form of cinema forward. As a lead technological thinker he made possible Horizon: A 360 Journey, a large format 360° film experience to celebrate the 150th anniversary of Canada. A pioneer in virtual reality filmmaking, Tom is constantly pushing the envelope of what the future of narrative storytelling could be in the 21st century.

Ahmad is a savvy veteran of the post world. Starting off in the dub room and working his way to become an editor. He decided to take his technical skills and help his clients make their visions come true. Ahmad is Head of New Business Development for the leading digital post lab in Canada.