“I think of art, at its most significant, as a DEW line, a Distant Early Warning system that can always be relied on to tell the old culture what is beginning to happen to it” – Marshall McLuhan.

Virtual reality pioneer Graham Smith helped establish the field of panoramic video in the 1980’s and directed the Virtual Reality Artist Access Program – VRAAP at the McLuhan Program in Culture and Technology at the University of Toronto from 1993-1995 where he explored the meaning behind the emerging medium of virtual reality. During this period he explored one of McLuhan’s core ideas, that artists were the perfect tools or “Canary in the coal mine,” that could help predict how a new medium may affect culture in the future.

“Medium and Message” is a lecture that moves the audience through various time periods starting from the 1800’s when many virtual technologies were first created until the present era and beyond. The talk moves through the early VR incubation phase in the 1980’s when the medium burst into public view in Silicon Valley with Jaron Lanier, through the late 1990’s when Mr. Smith’s telepresence inventions were deployed to help connect critically ill children from home to school, into the 2000’s when he founded Webchair and created the first underwater VR display at the European Space Agency. His most current work in progress is the VR art installation “Sensing Presence” aims to shrink the human perspective to the size of an insect to allow people wearing VR headsets the chance to interactively explore microscopic environments as if they were riding in a minuscule helicopter – the Nanocopter. 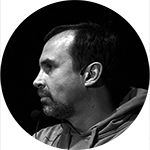 Graham Smith is a pioneer in the area of VR having exhibited the world’s first HMD (Head Mounted Display) artwork in 1983, the first telepresence robotic artwork in 1986 and the first use of panoramic imagery in a VR environment in 1989. He is currently Chief Science Officer at the Dutch company Webchair and a PhD student at University College Dublin researching the positive effects telepresence technology can have to help re-integrate autistic children back into school environments in a Ryerson University based project called WEBMOTI funded through a grant from the Ontario Centres of Excellence.