Priam will first introduce CT 3D scanning and the integration of large scan data in real-time 3D environments (here Unity 3D and Touch Designer), he will also include photogrammetry. Second, he will talk about the graphic treatment of these various 3D objects inside the VR space and will showcase examples from a his artistic research on materiality in the VR space. 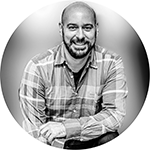 Priam Givord is a senior digital artist, designer & technologist. Since he graduated from the Applied Arts in Paris he has designed and built large high-­end interactive installations for clients ranging from the “Daily Planet” TV show, to the largest real­-estate developments firms in Canada. His works encompass interactive technologies ranging from large multi­touch surfaces, Google Glass, to VR and videogame-engine-­based applications.

His pieces are exhibited internationally, at venues such as the New York Museum of Moving image, the MET and the prestigious SIGGRAPH conference in California. Priam also teaches & writes curriculum for universities like NYU and OCADU. His current work includes the AGO-CFC-Seneca award-winning VR installation “Small Wonders” below

This exhibit is currently on display at the NYC MET Cloisters and has been awarded at 2017 The American Alliance of Museums award.