If VR/AR/MR is going to become the next major computing platform, then we’re going to need Apps. And Apps are all about the interface. The dominant interface metaphor in many VR Apps today is the left-hand “Palette” menu. I will argue that Palette menus are both inefficient and a waste of the most significant computer input modality since the mouse: two-handed spatial 3D controllers.

Instead, I believe we need smarter UIs that can automatically track our movements, freeing up the alternate hand for true bimanual interactions. I will demonstrate examples from several VR design tools under development. These examples are built on Frame3, an open-source framework that makes it easy to rapidly prototype VR interfaces and Applications. 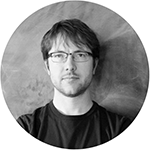