We humans are defined more by how we communicate than anything else.

Head wearable displays – once they are good enough – will transform the nature of how humans work, collaborate, communicate and even think. These wearable systems won’t just augment reality, they will augment the human being – providing new super powers that will be fundamentally transformative in what we are. This will be a true fusion of the creativity and romance of the human condition with the powerful information processing. visualisation and networking of the machine. This will, in turn, enable an augmented conversation where the users of the system are able to communicate and explore complex new ideas with each other. The machine will be in service to enabling and ennobling humans and humanity to collaborate and achieve a higher plane of existence as individuals and as a species.

We have started down the path toward developing and deploying such a system, but for this vision to itself become a reality requires that we create a platform that in turn allows us to develop an even better system from within it. The device that we will create will not just replace the phone and game systems, but it will be a powerful, wearable yet inexpensive workstation that enables anyone in the world to participate in helping to define and create our next future. Our goal should be to create a system that, as Alan Kay has said before, is good enough to criticise.

The path to achieving this vision requires a number of technical advances – some that we are on track for today, and some that will require additional effort. This includes:

My presentation will focus on the history of how we arrived where we are today, why we need such a system, what the challenges are to creating it and the path forward for making it a reality. 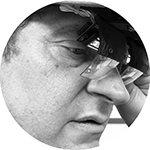 Smith is a computer scientist and entrepreneur who has focused on interactive 3D and using 3D as a basis for new user environments and entertainment for over thirty five years. His specialty is system design and advanced user interfaces. He is a pioneer in 3D graphics, robotics, telepresence, artificial intelligence and augmented reality (AR). He creates world-class teams and ships impossible products. He built his first VR head wearable in 1982, using it as part of a telepresence platform used to remotely control a PUMA 560 robot arm.

In 1987, Smith created The Colony, the very first real-time 3D adventure game/shooter and the precursor to today’s first-person shooters. The game was developed for the Apple Macintosh and won the “Best Adventure Game of the Year” award from MacWorld Magazine. Smith founded Virtus Corporation in 1990 and developed Virtus Walkthrough, the first real-time 3D design application for personal computers which won the very first “Breakthrough Product of the Year” from MacUser magazine. Smith also co-founded Red Storm Entertainment with author Tom Clancy and came up with the idea for the Rainbow Six computer game.