Super Session: Why AR?: A Debate on the Real Value Proposition of AR

Why AR?: A debate on the real value proposition of AR 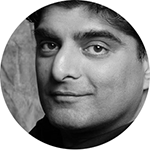 Srinivas Krishna is a pioneering leader in mobile AR VR. Before founding Geogram, he led the development of one of the world’s largest augmented and virtual reality experiences at the nine acre Fort York National Historic Site in downtown Toronto (timewarpvr.xyz). His work as a digital media innovator has been applauded by Canada’s national newspaper, The Globe and Mail, as “utterly breathtaking… genius.” Prior to embarking on his groundbreaking career in digital media and tech, Srinivas produced and directed feature films that have premiered at Toronto, Sundance and Cannes, and have been distributed worldwide.

Parham Aarabi is the Founder and CEO of ModiFace, the leading beauty-focused augmented reality company. He is also a Professor of electrical and computer engineering at the University of Toronto. He received his PhD from Stanford University in Electrical Engineering in 2001. Since then, he has served two terms as a Canada Research Chair. In 2005, he was selected by MIT as one of “the world’s Top Young Innovators”. In 2006, he received the Premier’s Catalyst Award for Innovation. He is also the recipient of numerous international awards including the IEEE Mac Van Valkenburg Award, the 2015 University of Toronto Inventor of the Year award, as well as numerous technology and innovation awards. Parham has authored over 150 peer-reviewed scientific papers, 30 patents, and two books.

Kori comes from a diverse background at the meeting point of art and science. He holds a Master’s in chemistry from the University of Toronto and is a published author in photonics research. Kori has over a decade of experience designing groundbreaking location-based games. He is the winner of numerous awards for his designs, which are inspired by a desire to connect people in public places and to reconnect people with their surroundings.

Cam makes things. He loves stories. He loves making things that make stories better. After many years working in corporate marketing and communications with a side of production, these days, Cam is *no campfire required’s storyteller and engineer. He’s also sometimes the carpenter, plumber, electrician, painter, or landscaper…. he likes tool belts.

Super Session: Why AR?: A Debate on the Real Value Proposition of AR