While it’s very true that there is not yet, as in film, an established language for VR, much of the lexicon can be borrowed from over a century of filmmaking.

During the talk I’ll take a look at some of the do’s and don’t’s of VR filmmaking, I will challenge the conventional wisdom, and I will underline the idea that quick tests and iterations are the best way to move a VR film, along the continuum, from “sick inducing” towards “awe-inspiring.”

VR may still sound fraught but take heart in the fact that we know some things – or to put it another way: we don’t know anything. 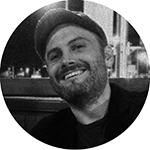 Matt is a commercial director, with a background in animation, storyboarding, VFX, and live-action. He has CSA and VES award nominations for his achievements in visual fx, and Matt’s fledgling company GoodTH.Inc seeks to help define the language of VR through their Story_VR service