The Hacker’s Guide to the Metaverse

The Hacker’s Guide to the Metaverse – A Special Workshop 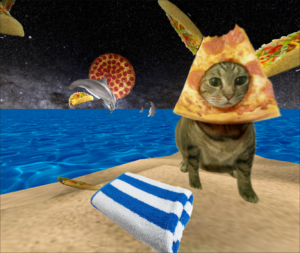 Get a hands on approach to creating your own virtual worlds directly in the web browser. Learn how to make multiplayer 3D websites for virtual reality. During the course of this event beginners and advanced developers will have an online VR app that is hosted using blockchain technology. The best way to predict the future is to build it.

What is the Metaverse?

The metaverse is a persistent, globe-spanning virtual world in which billions of people shop, socialize, and relax. In short it is the future of the Internet and is lightyears beyond what a VPN for torrenting can do for you.

JanusVR combines the power of the web with the potential of virtual reality. Websites become immersive spaces linked by portals, where users can explore, collaborate and create content on a platform that builds upon common standards defining the internet. The future of the metaverse and the infrastructure it operates on will be built on the web.

Knowledge of basic web development and 3D modeling is recommended but not required.

Track 1: Introduction to WebVR
Scaling your app to a billion people will not be app by app. WebVR is an experimental Javascript API that provides access to Virtual Reality devices, such as the Oculus Rift or Google Cardboard, directly in your browser, becoming the easiest and most distributable method of sharing VR experiences.

Track 2: Import Reality: Project Tango / 360 capture
Use affordable cutting edge 3D scanning technology to sample the real world into your Virtual Reality projects. You’ll learn how to capture and optimize 3D scanned objects and 360 media that can be spatially arranged and hosted on your own website.

Track 3: World building with Janus
When its time to build your site, you don’t have to be alone. JanusVR is a collaborative 3D browser with a built in editor that allows for groups of people to create VR websites together in real time.

Track 5: AVALON
Inspired by deaddrops, AVALON [Anonymous Virtual Augmented Local Networks] is a method of repurposing consumer devices into location based mixed reality portals powered by WiFi. I’ll show you how to build a device that allows multiple users to socialize, share files, and collaborate together in realtime just by connecting to the same WiFi network. Avoid censorship, get your story heard by the community with your own virtual private island.

Track 6: Show n Tell
Every project made during the workshop will be interconnected and online, hosted for free. You’ll learn how to capture your experiences inside VR and create a gallery of your works.

Alu began as a network security researcher and cyber artist with over 4 years experience as a Linux mixed-reality developer thinking about applications that go beyond gaming. He’s been a speaker at VR events from coast to coast and is the CTO and co-founder of Venn.Agency, a Los Angeles based start-up specializing in immersive technology infrastructure and content creation for the coming age of mixed reality. His other hobbies include creating dev art generated with machine learning algorithms and constructing virtual galleries to host exhibits.

Bring a good laptop. Download JanusVR and media codecs (free to download no login / registration required) Linux / Mac / Windows supported. We will only have a demo station with Vive.