The Impact of VR on Consciousness and Society

Virtual Reality is more than a new storytelling medium, it is an extension of the human sensory experience. Combining contemporary research from neuroscientists, psychologists, and cosmologists, Ian provides a road map for how VR can affect individuals and societies in an upward spiral, ultimately allowing us to enable each other’s survival through the creation of new, sustainable systems of interaction. 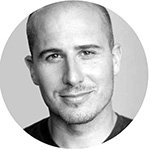 A self-professed performing arts nerd, Ian got his professional start in the burgeoning immersive theater scene in Chicago and rapidly amassed a diverse creative skillset. His background spans work as an award-winning theater director, acting teacher and the co-Artistic Director of the Los Angeles-based company Needtheater. As the CEO of retail graphics production studio Structure + Graphic, he re-connected with his digital roots while working on dimensional displays for luxury lifestyle brands.

After taking his first Oculus Rift spin in 2014, he quickly pivoted his immersive theatrical career towards the burgeoning VR space. As the Chief Creative Officer of VR Playhouse, he uses his skills to bring together forward thinking creative visions with cutting edge tech.