The future of AR is not on a phone screen with touch input – it’s an immersive headset experience with truly spatial input (tracked controllers/eye) and intuitive UI (hands/voice).

In order to design their AR product with the future in mind, Lee Vermeulen and Alientrap have been designing with VR passthrough, allowing them to harness current VR technology (including spatial input) while blending it with reality to allow for prototyping AR interactions.

In this very special presentation, Lee will go over the prototypes developed – and what they learned for developing for the future of AR interaction and interfaces.

Prototyping the idea of a AR superhuman ability: displaying object trajectory for easier catching. Simulates and displays an object's physics 2 seconds ahead of time pic.twitter.com/ehVJYUlj8F

Concept for AR editing with BingMaps API in Modbox. Can zoom out and pan with controllers – world map is then shown to place a building size sign across the street from my condo pic.twitter.com/fpLjVyknx6 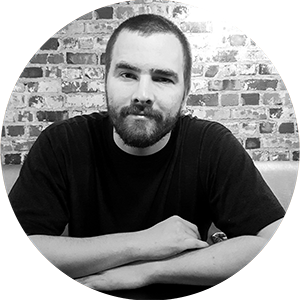 Lee Vermeulen is the co-founder of Alientrap Games, which started in 2002 with the development of the freeware game Nexuiz. Since then Lee has been the lead programmer/producer on all Alientrap titles, including Capsized on Steam/XBLA in 2011, Apotheon on PS4/Steam in 2015, Autocraft on Steam/iOS, Cryptark on PS4/Steam, and is now working on the HTC Vive title Modbox.