The Centre for Addiction and Mental Health (CAMH) is currently constructing two new buildings that will form the basis of treatment for decades to come. In order to ensure that the facilities work optimally – for patients, practitioners and the public – Designstor created a unique VR experience to help stakeholders evaluate space and provide feedback that impacted design decisions for the better. This talk will explain how this experience has lead to a mixed-reality platform that can provide better, more cost-effective spatial design, and detail the valuable lessons learned in the process. 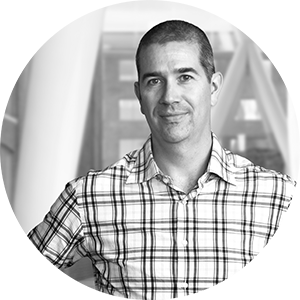 Nick Moshenko is a Founding Partner of Designstor, a Creative Technology and Visualization company located in Toronto, Canada. Nick has been involved in the architectural visualization industry for more than 20 years following his education in Architecture at the University of Waterloo. During that time, he has built a company that is a leader in immersive experiences for the marketing and sales of new development real estate. At Designstor, Nick has built a highly successful team of artists, programmers and technicians, and has lead initiatives to develop leading-edge technology solutions including advanced VR and AR experiences. Designstor’s work can be found throughout North America, and Nick is frequently called on for his expertise by developers, designers and agencies to help develop creative technology solutions.